Six inspiring individuals from across Northern Ireland were awarded SuperStar status in Belfast this week, with the return of the third annual SuperValu SuperStars Awards.

The popular initiative recognises those who had gone beyond the call of duty to help people and communities in need. Almost 30 local heroes were shortlisted within the categories of Young SuperStar, Fundraising SuperStar, Unsung SuperStar, Community Group SuperStar and Social Enterprise SuperStar.

From life-savers to inspiring caregivers, volunteers, community activists and fantastic fundraisers, the shortlist shone the spotlight on the people that have gone above and beyond to make a difference in communities across Northern Ireland. 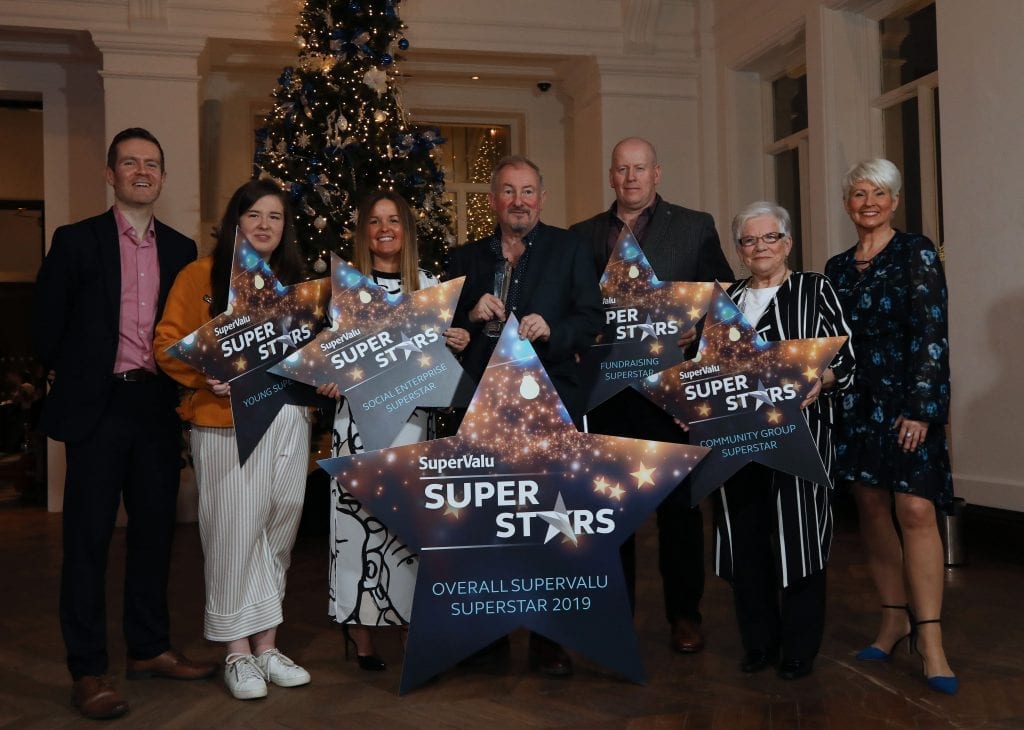 Kaitlyn McNally (14) from Randalstown was named Young SuperStar. Kaitlyn provided support as a Young Carer to her best friend Mary, who suffered a brain injury as a result of a traffic accident in 2017 and requires constant care.

In a very competitive category, Brian Doherty from Glarryford clinched the Fundraising SuperStar title. Brian who is registered blind, raised almost £20,000 for Guide Dogs NI through fundraising activities including a 50-mile sponsored walk.

The Unsung SuperStar gong went to Gary Trew from Bangor, a single foster carer and voluntary leader of the Antrim Gateway Club, who dedicated his time for over 33 years to support those with learning difficulties through sport, leisure and social opportunities.

Patricia McConnell, from Carnlough claimed the Community Group SuperStar award. The Co. Antrim woman has made a huge contribution to the continuation of the Carnlough Community Association over the past 14 years, including the organisation of summer schemes, liaison with local primary schools and various heritage projects.

Finally, Julie Graham from Dundonald received the Social Enterprise SuperStar award in recognition for her contribution to Right Reasons in Dundonald, a local cafe facilitated by staff with learning difficulties. Julie trains all of the staff and goes above and beyond to ensure that they gain the skills required to seek future employment.

In addition, Deirdre Fegan from SuperValu Lisburn was honoured with the Action Cancer SuperStar award for her work in helping to raise cash for Action Cancer.  As store fundraising champion, Deirdre goes above and beyond to make sure the store raises much needed funds each year.

The overall winner, Gary Trew from Bangor walked away with £1,000 for himself and a £1,000 donation to a registered charity of his choice.  All other finalists received SuperValu vouchers.

Brendan Gallen, Head of Marketing, Musgrave NI said: “With SuperValu SuperStars, we set out to uncover and recognise remarkable individuals, including adults, children, community groups and people that have gone beyond the call of duty. The competition was extremely tough; each and every finalist should be very proud of their achievements. Our congratulations go to all of our winners, who are very deserving of their newfound SuperStar status.”

Judge and host of SuperValu SuperStars, Pamela Ballantine, said: “I am thrilled to once again to be part of SuperValu SuperStars, an initiative which rewards local heroes for making contributions to communities right across Northern Ireland. It was so inspiring to hear the stories of unsung heroes and the incredible work being done by children and adults that might otherwise have gone unrewarded. It was an honour to meet these inspirational individuals and to see them receive such well-deserved recognition for their achievements.”

SuperValu SuperStars media partners are The Sun and U105.  The initiative is sponsored by Action Cancer, Balkan Holidays, Denny, Dove, Kinder Ice Cream, Philadelphia and RiverRock.

Winners and finalists for the SuperValu SuperStars Awards 2019 include: